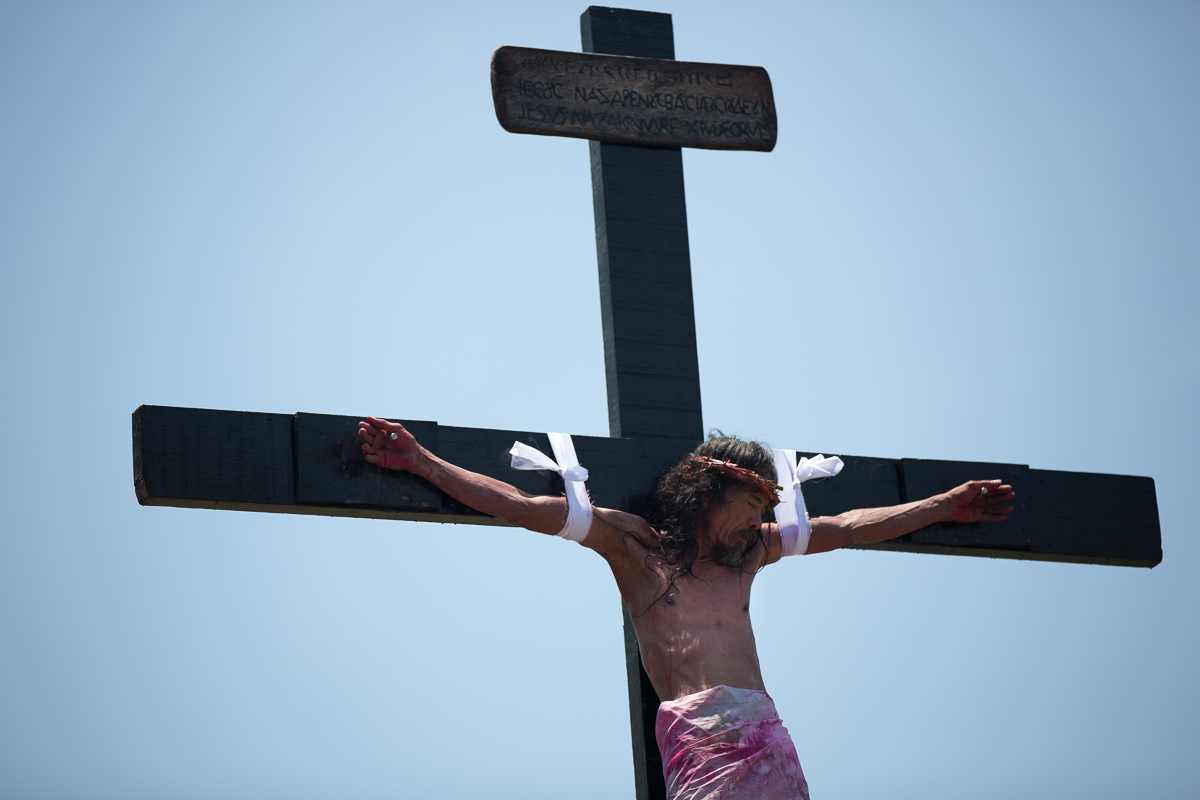 Holy Week for me meant I get to stay home for 4 days and not work and sloth around eating, sleeping late and doing nothing. Sometimes we would go to the beach with the family but it’s usually hot time of the month. 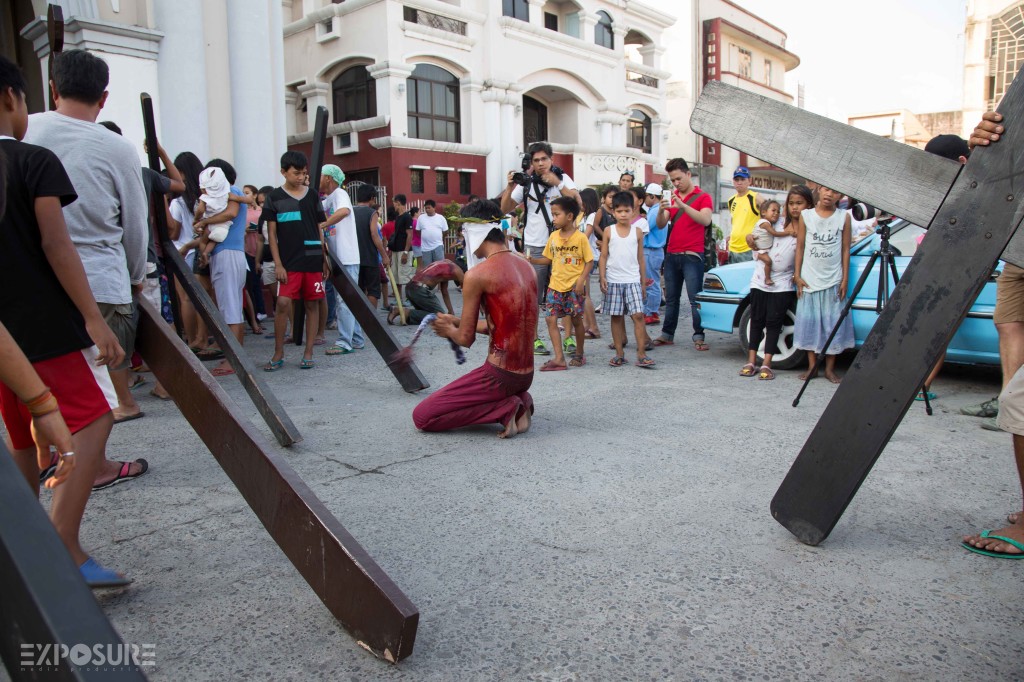 After carrying the cross, they stop at the church to pray outside, although the church does not support Penitensya.

I remember when coming home to Dagupan from Manila, we’d see penitents along the road, carrying crosses or whipping themselves all bloody, but for a local like me, it’s an ordinary sight during the Holy Week. 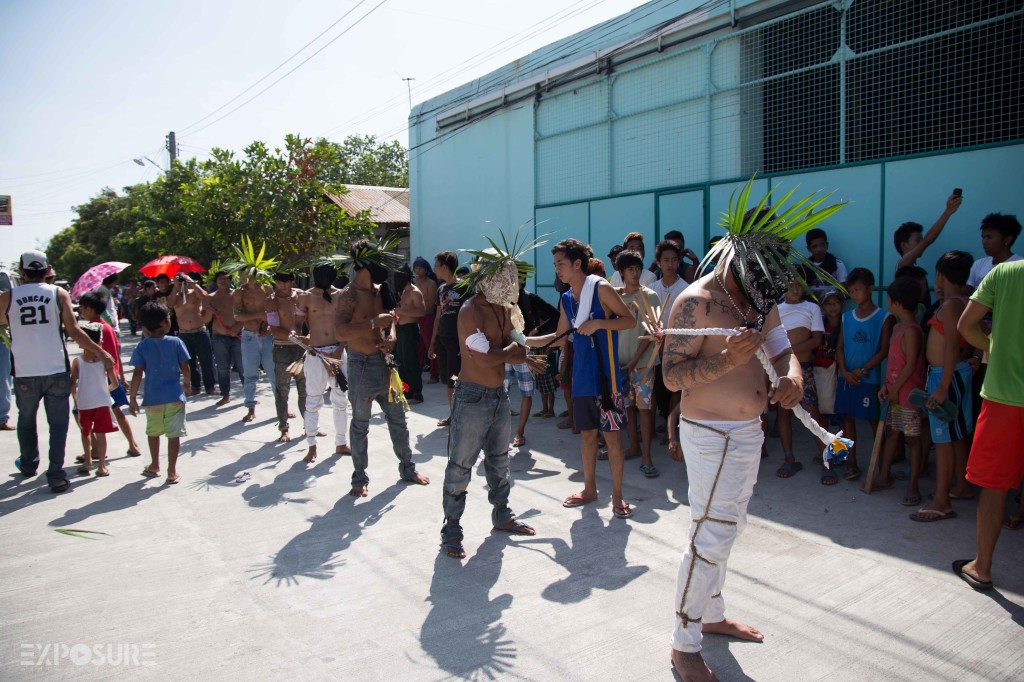 I never thought I’d go to Pampanga to witness the crucifixion if not for Peter wanting to go there.

Upon researching, it turns out there are 3 barangays (districts) in Pampanga that re-enact the crucifixion of Christ. The most popular is Brgy. San Pedro, of the other two Brgys we chose Brgy. Sta. Lucia over San Juan.  This proved to be was a good decision because San Juan was already crowded!!).

The shoot went okay, although it was incredibly hot and the heat from the asphalt made it even hotter. The only thing refreshing was the whipping penitent’s blood splattering on my legs because it felt cold… 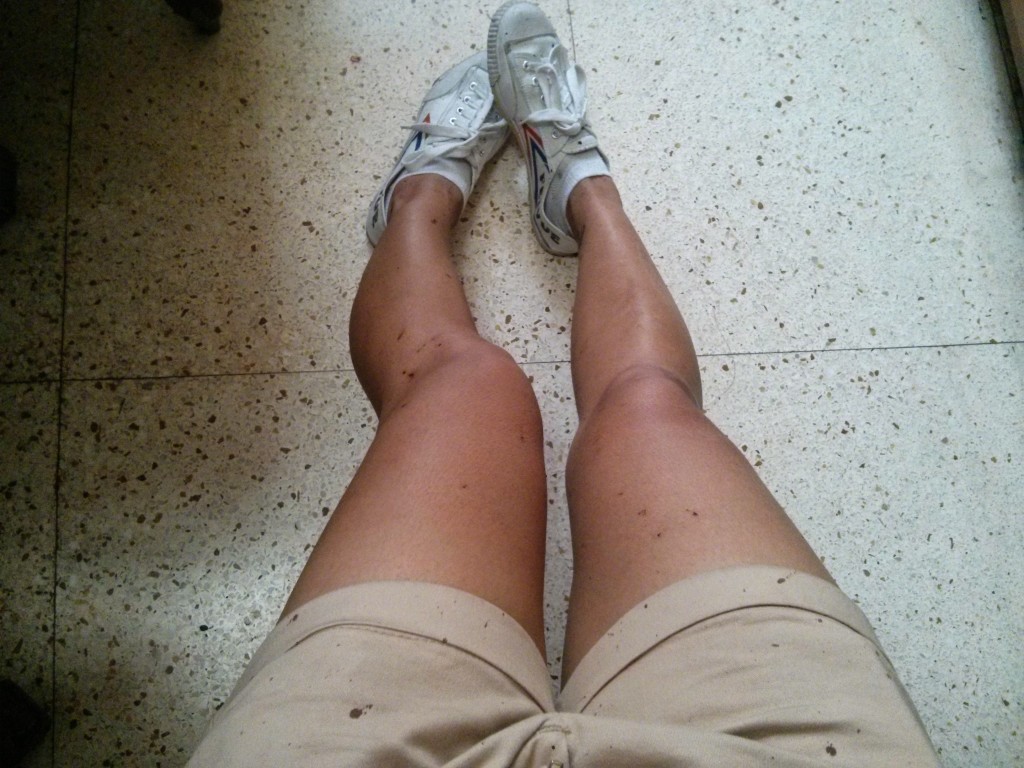 The aftermath, my blood-splattered legs, on my shoes, shorts, shirt, bag and even some on my face. Feiyue represent!!!

All along, I thought the blood on their backs was from whipping, but it turns out, they cut it with a razor or broken glass first!! But then, other penitent’s backs are almost bleeding from the welts created by the whipping. 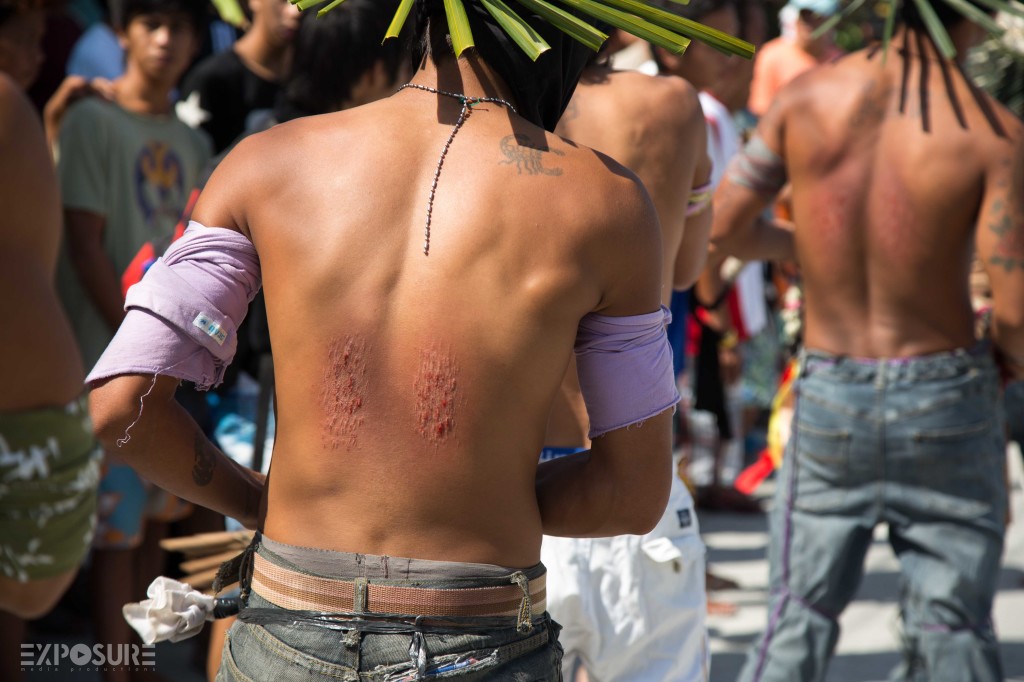 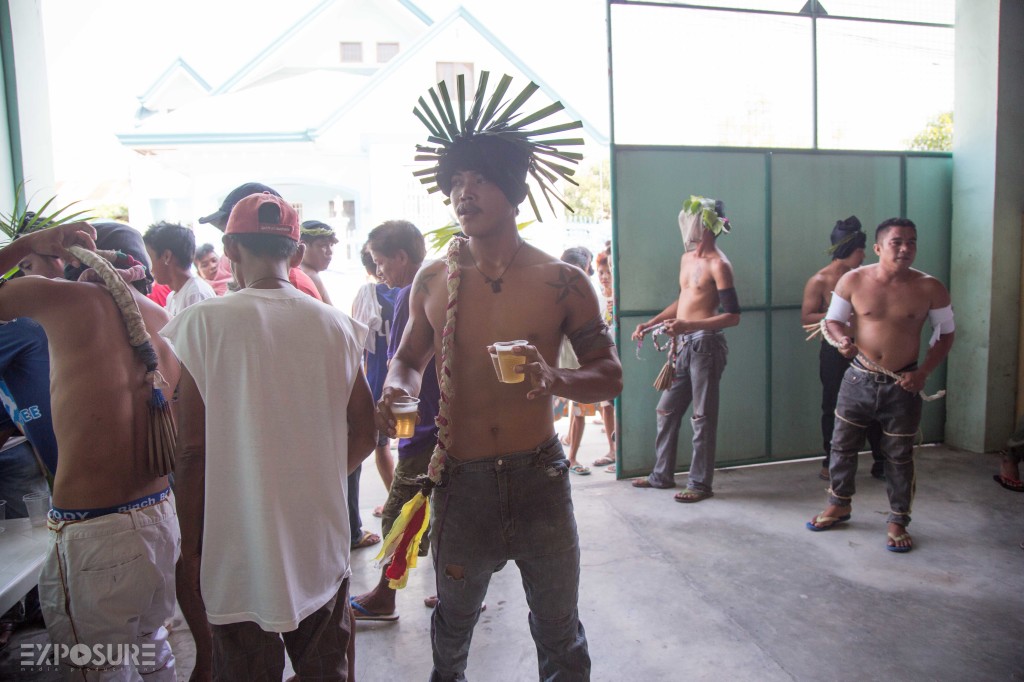 The secret of the penitents: Red Horse Beer.

It was circus come the time of the crucifixion of Danilo (the guy we followed for this story), because ALL photographers are now allowed on the mound and everyone was pushing and shoving just to get that shot! 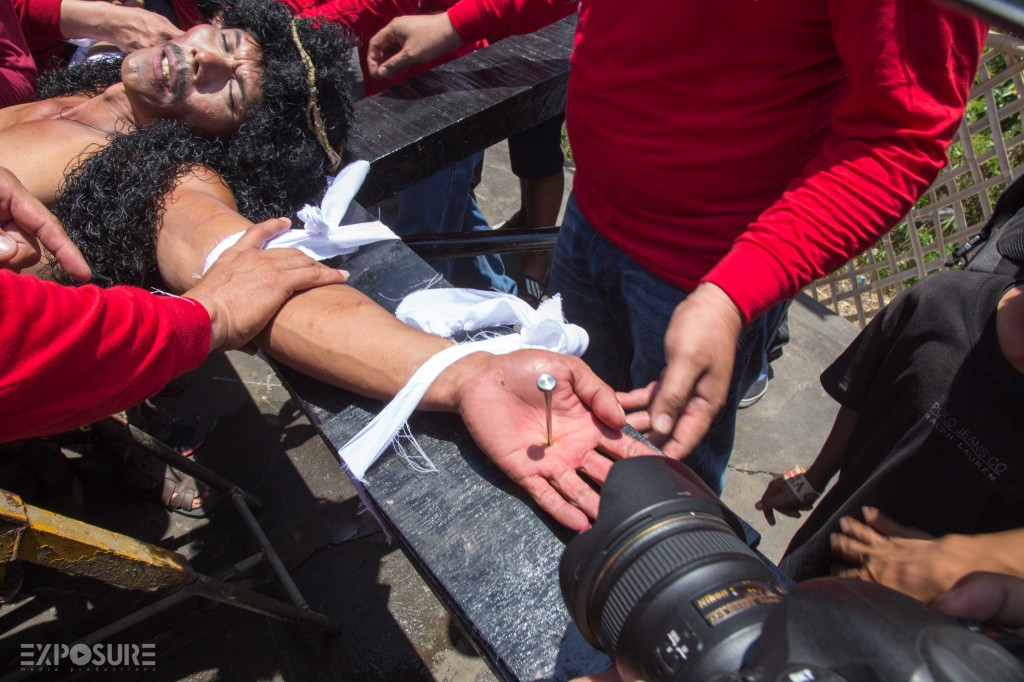 Lots of pushing and shoving just to get near.

Here’s the video of Danilo’s story.

This is the first time I properly edited a video with Final Cut Pro X, 99% of it anyway. It is definitely different from editing photos but quite challenging and I think I’m getting the hang of it. Taking breaks in between is a must or else I’d go crazy. Plus having Peter as my editor is tough, so much revisions, but thanks for the guidance!

Imagine doing all this on a 13” screen.

Before coming to the Philippines I knew it was a strongly Catholic and religious country but I didn’t really fully understand to what degree until I visited Pampanga over the holy week. 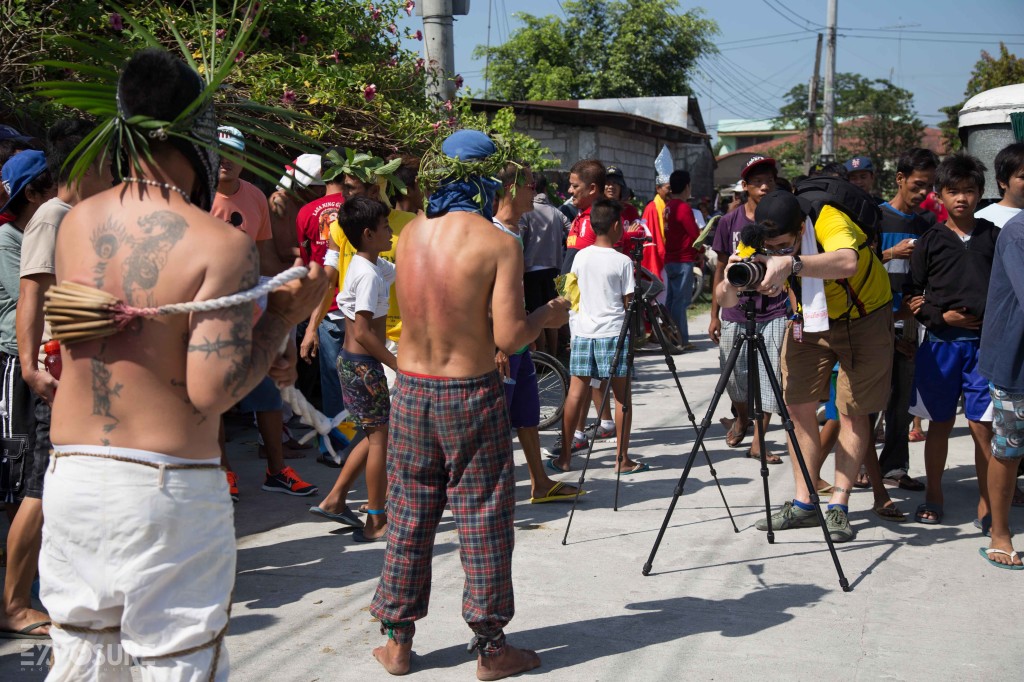 I was shocked to see that people whip themselves and even crucify themselves in the name of religion. It was something that intrigued me and so after a little research we headed to Pampanga to meet Danilo Ramos who has been crucified every year for the past 20 years. 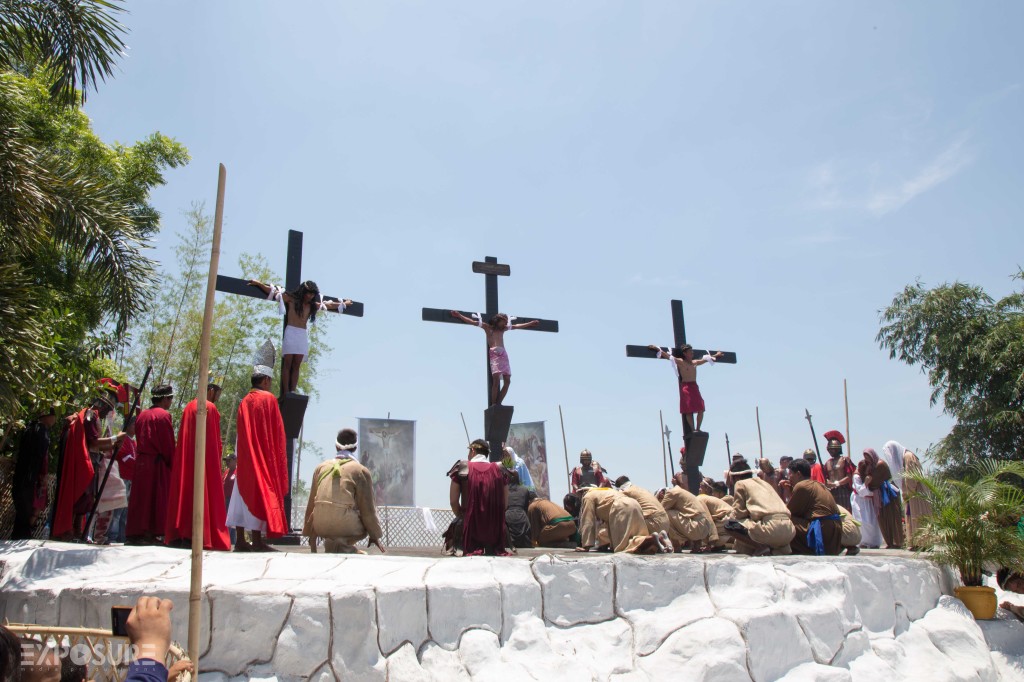 I couldn’t get my head around why someone would do that to their bodies and so we decided to make a short video about Danilo and the religious activities that occur in Pampanga during holy week.

We travelled to Pampanga several days before holy week and the first thing that struck me was the heat. It was HOT about as hot as I can remember being in the Philippines. That meant we had to be careful and plan the shoot as carrying around 20kg of equipment in near 40C heat for 5 or 6 hours was going to be tough.

We met Danilo and the Barangay captain who was busy putting the finishing touches on the preparations for the big day. It really is one of the biggest days of the year for the community.

On the day of the shoot we started early as we wanted to try and shoot as much as possible in the morning light and avoid the heat. We planned to first shoot the penitnesya – the masked men who flog themselves and walk around the town. It really is quite gruesome. There is a lot of blood and we got splattered trying to get close and record video and take photos. It definitely isn’t for the faint-hearted. I was quite surprised to learn that the blood was not a result of the flogging but from small incisions made either by razor blades or broken glass. I wince just thinking about it! 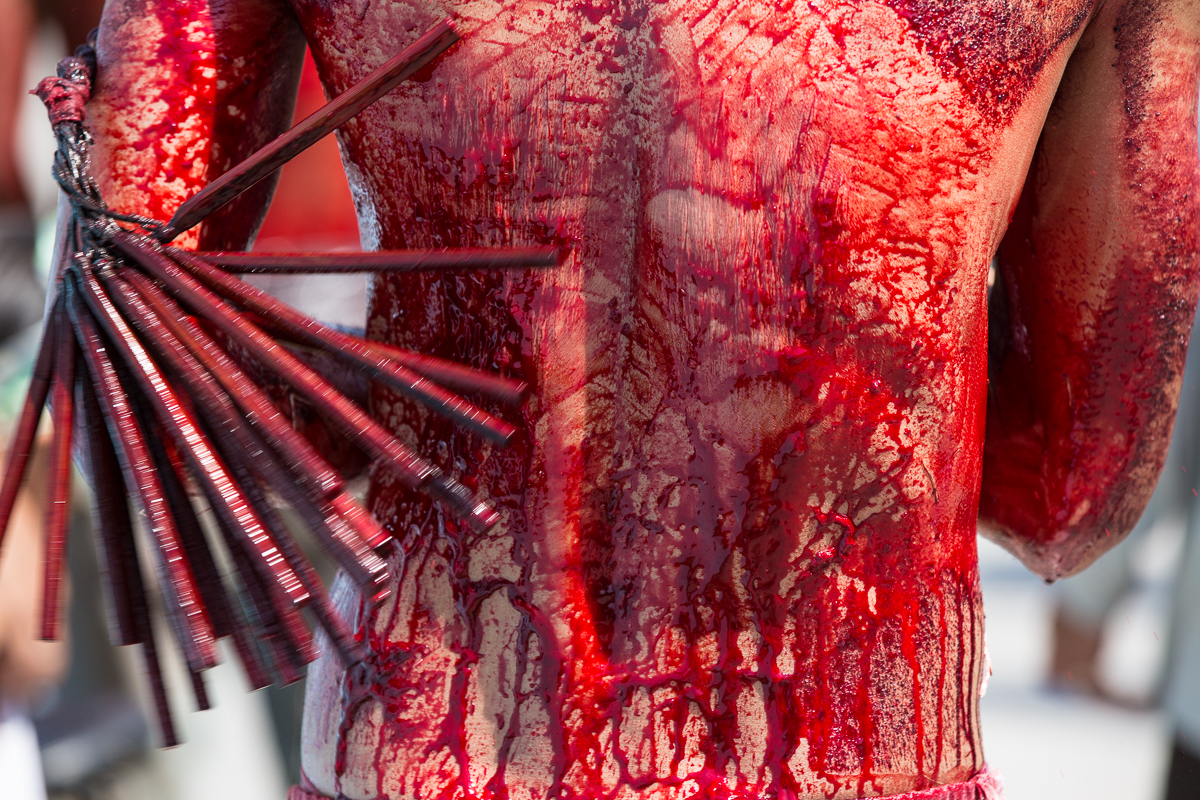 The shoot itself went reasonably as planned but trying to navigate through the crowds and also avoid getting covered in blood to film Danilo was a challenge.

The crucifixion was a little more challenging to film and was a big production, which was quite bizarre. A loudspeaker system and a cast of about 50 people were involved in the reenactment. It was a surreal experience to see men in make up with false moustaches and beards in a play that results in three people being nailed to a cross. It is very popular though and the Barangay which we visited Santa Lucia, had crowds of around 10,000 people. In other, more popular Barangays the crowds can be twice or even three times as large.

Even though we chose a smaller performance it was still quite a media scrum and we didn’t get every shot on out shot list but we were pleased with what we got and definitely learnt some valuable lessons. It won’t win any prizes or awards but we feel it’s a good look at a very intriguing aspect of religion in the Philippines and we may even return next year to feature a story about one of the masked men who flog themselves.

Posted on May 16, 2014 in Journal, Philippines, Photography, Travel, Video